Work has started on the new state-of-the-art home and visitor centre for Wells & Co, an independent, family-owned business with a 190-strong estate of award-winning pubs.

Clegg Food Projects is the principal contractor responsible for delivering the Bedford based project. It is expected to be completed in early summer 2020.

The new site – called Brewpoint – also marks a historic moment in the brand’s 143-year history. The company recently announced that it will be rebranding from Charles Wells to Wells & Co.

John Moxon, business development director at Clegg Food Projects, said: “We’re delighted to be working on such a major project for Wells & Co., particularly as the facility will become a flagship for the company.

“Alongside the construction works, we’re also providing the mechanical and electrical services with a full-time site-based team to manage the project. Once the works have progressed to the appropriate stage, we’ll also be overseeing and coordinating with the various suppliers and specialist brewing equipment installers to ensure everything runs smoothly.

“The brewing industry is doing really well at the moment. We’ve had a number of enquires within the sector. We’re therefore delighted to be delivering Brewpoint and to see the project come to life.” 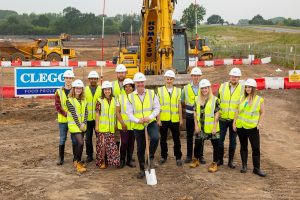 Brewpoint is primarily Wells & Co.’s new HQ and brewing facility. However, the site will also incorporate a pub-restaurant, retail shop, coffee roastery, offices and a visitor centre that will offer guided tours.

Peter Wells, commercial director at Wells & Co., commented: “The creation of our beautifully designed new home is a statement of confidence about our future direction as a company. Brewpoint will be capable of producing a range of beer styles that we could only have dreamed of ten years ago.

“Our new home and the growing investment in our managed pubs are reflective of our plans to meet the changing needs of the next generation of customers. In the last year alone we have added twelve pubs to our portfolio, while investing £3.5 million into enhancing our existing estate.”

Alongside the main brewing plant – which will be capable of producing 30,000 hectolitres of beer each year equivalent to five million pints – Brewpoint will also have a small 100 litre brewing facility in order to provide a continual stream of something new to try at the Brewpoint the bar every week.

It will also offer the opportunity for anybody to come and brew a beer at Brewpoint. The site has been designed with sustainability in mind and has solar cells on the roof, solar shading, air source heating and cooling alongside a highly efficient modern brewing plant.

For more information or to find out how we can help you then please get in touch with our team or follow @CleggFoodP on Twitter.

For support in designing and delivering excellent food and drink facilities, get in touch with our expert team.